Developing the Substance Within

Developing the Substance Within 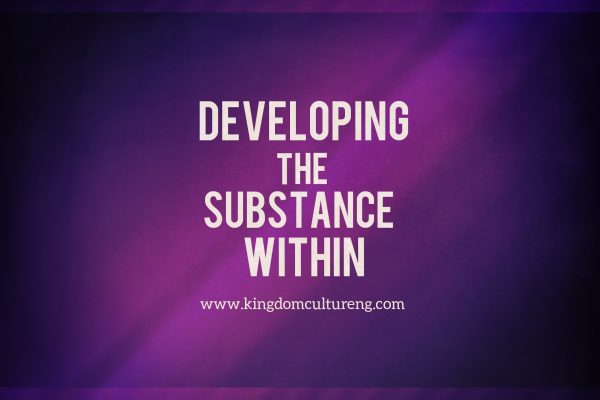 God has created every individual with great substance within. This means that whatever we need to succeed God has already put in us and all we need to achieve this success is to go through certain changes within. Anyone can go through this process of change once they have made the decision. This process involves a person converting the substance within to generate surplus or great value within his/her live. In reference to the above scripture therefore, every man has value in abundance within and that value needs to be exploited in other to move up in life and to be who God has created you to be.

Jesus talks about the parable of the talents where one man had five talents, another two and the last, one. The one that had five traded it and got five more, the man with two traded and got two more but the man with one talent hid it.  When the lord came to him that traded and got five he said well-done good and faithful servant, enter into the joy of the lord. I will make you ruler of all. He said the same thing to the person with two but to the man with one He said ‘you unprofitable, wicked and slothful servant, cast him into the outermost darkness where there will be weeping and gnashing of teeth” Every time you do not utilize or make use of what God has blessed you with you hold back the profitability in it and in you. It means you are being wicked to yourself and to God that has placed such valuable substance in you. Not harnessing it says a lot to God.

In Luke’s account of the story, Jesus told the first two servants I will make you rulers over ten cities and five cities but spoke about casting the third servant out. Resources tend to or will gravitate towards those that are most productive with what they have in their hands. Those making use of what is in their hands daily and are highly productive with it, are people that resources will naturally gravitate towards. Every time you generate excess with what you have, you tend to produce more till you have in abundance.

Therefore, productivity will always birth increase. The men who produced more, Jesus called and said unto them “go and become rulers over ten cities, rulers over five cities.” This is the scriptural way to go into governance.  You must first show yourself as being productive in your own personal space with whatever you have no matter how little you might think it is.

Remember we are in an era where no one is being judged based on productivity but rather on allocation. Everyone must be able to create increase on the inside that will also be evident on the outside whether you are a leader or a subordinate. You must have it within yourself to generate things from within, breaking beyond the limitations of certain boundaries, and being able to think outside the box. In addition you must put aside the entitlement mentality so you can focus fully on what is expected of you.