The Full Assurance of Faith

The Full Assurance of Faith 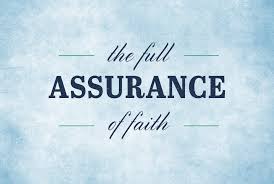 “And he said, whereunto shall we liken the kingdom of God? or with what comparison shall we compare it? It is like a grain of mustard seed, which, when it is sown in the earth, is less than all the seeds that be in the earth”(Mk 4:30-31) “So then faith comes by hearing, and hearing by the word of God.”(Rom 10:17)

You need to hear the truth of God’s word over and over again. The first time you hear the word is when it is planted in you. Subsequently the more times you hear the same word it is being watered within. That is when God will bring the increase, i.e. when the watering is going on within your heart. When a seed is planted and not watered, there would not be increase. When we hear what we already know over and over again, that is when getting an increase or results is made possible in our lives.

In spiritual things, actions that produce results must be birthed with certainty in the heart. If there is any iota of doubt in your heart about something, even if actions are carried out concerning it, power would not be released to bring it to pass because on the inside, there is double mindedness. That is why the Bible talks about a full assurance of faith in Heb 10:22-23 which says, “Let us draw near with a true heart in full assurance of faith, having our hearts sprinkled from an evil conscience, and our bodies washed with pure water. Let us hold fast the profession of our faith without wavering; for he is faithful that promised”.
The righteousness that is of faith starts with the statement that comes from the heart. The heart must be in total agreement with the words on your lips. For this to be, every doubt must have been removed from the heart. Abraham was fully persuaded and for him to be fully persuaded means one could be partially persuaded or not persuaded at all. The man who brought his son to the disciples had some measure of faith in him. He said to Jesus ‘Lord I believe, help thou my unbelief’ (Mk 9:24). This means that he admitted that although he believed, there was some measure of unbelief in him, so he asked Jesus to help his unbelief so that he would have a full assurance of faith. It will not just be a command on his lips but a statement of power from the heart.

There are times when you might want to give up on the outside but something within rises up and you stand up from within; this comes by repetition – exposing yourself to the word over and over again. Most of us have heard enough in our lives to get a breakthrough only if we would go through those things over and over and over again. But what happens is that we like to reach for something new and where the power lies is in exposing yourself to that same truth continuously and just like the scripture says it will definitely set you free.

Assurance, Faith, Full, Of, the